Legal letters are written for many reasons. They can be used to facilitate negotiations or remedy a conflict between two people or groups in lieu of a lawsuit. Because of their nature, legal letters should be professional, precise, and concise. They should communicate a message effectively and leave no doubts in the mind of the recipient.

In essence, drafting an effective legal letter requires time and effort. It also demands enforceability. A well-written legal letter should not only provide terms, but it should also stress that the terms are legally binding. In this article, we explore legal letter formats and how to draft an appropriate legal letter.

How to Write a Legal Letter

Follow the following guidelines when drafting your legal letter.

What Should You Include in a Legal Letter?

Legal letters often span a single page. This may lead people to mistakenly believe that they are easy to draft. While indeed concise, a legal letter should not compromise on substance. It should communicate all the intended information clearly and precisely. Typically, a professional legal letter constitutes:

RE: Legal Letter for {Purpose of Letter}

I am writing this letter to {state purpose of the letter}. Pursuant to {specific law} that states {state the law}, I would like to request {state your request}. You will find attached a copy of the agreement. Feel free to consult with your legal counsel before signing it.

As stipulated in the agreement, you have {amount of time} from {date} to respond to this letter. Failure to do so or provide a good reason for the failure could lead to {appropriate repercussion}.

Please send a copy of the agreement once signed and contact me at {contact information} for any further questions.

Thank you for your compliance.

RE: Request to Attend Court Hearings

I am writing as a request that the court issue an order of allowance on case 35/7890. Pursuant to Penal Code §2625, I would like to attend the court hearings concerning my child, Annabel Colin, date of birth 6 May 2002. The nest hearing is scheduled for 4 August, 2020.

I have expressed concerns about my child’s safety in a previous letter dated 14 June,2020. I believe it is in her best interest that I return to my custody.

I would also like to request that the court appoint an attorney to represent me as I cannot afford one at the moment.

Thank you for your time and consideration.

A legal letter carries serious consequences for all the involved parties. It should be easy to comprehend and should hold no errors or room for misinterpretation. A legal letter is often written with the aid of legal counsel. However, you can draft one even if you are not an attorney. You can use the following template and sample to guide you.

This is a letter written by an attorney to advise their client on a legal matter. It is often written in response to a question.
Details
File Format
Download

A letter to a judge can be written by a victim or on behalf of a defendant. It is often written regarding an ongoing case to express how it has affected those involved.
Details
File Format
Download

If a client owes you an overdue debt, you can send a legal letter to demand payment. This letter usually holds serious consequences if ignored.
Details
File Format
Download

A legal demand letter is the best way to resolve a conflict in place of a lawsuit. It is a precursor to negotiations on an injustice you may have suffered.
Details
File Format
Download

A legal letter is a formal document usually sent by an attorney on behalf of their client. While there are many types of legal letters, each with varying contents, the basic document will usually stipulate an agreement, the terms of the agreement, and the consequences of non-compliance. Here are a few legal letter formats and examples in Word and PDF Formats. 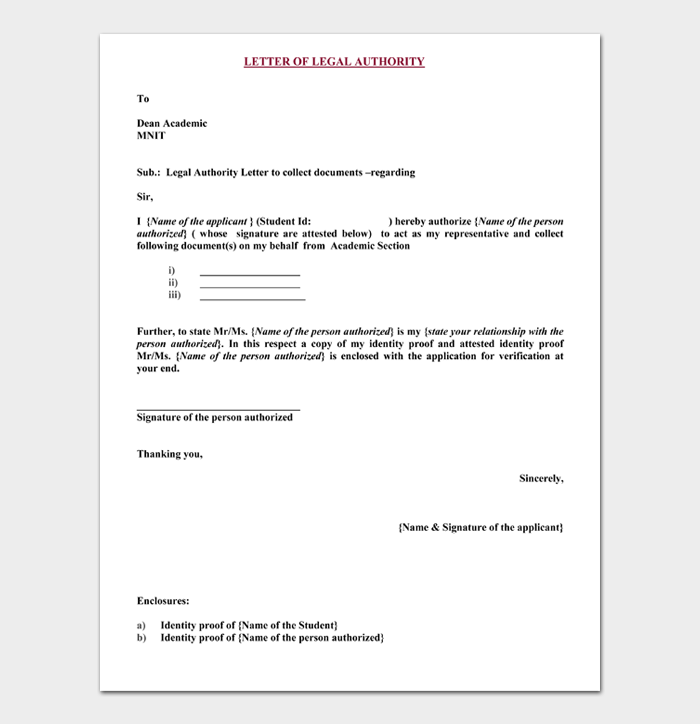 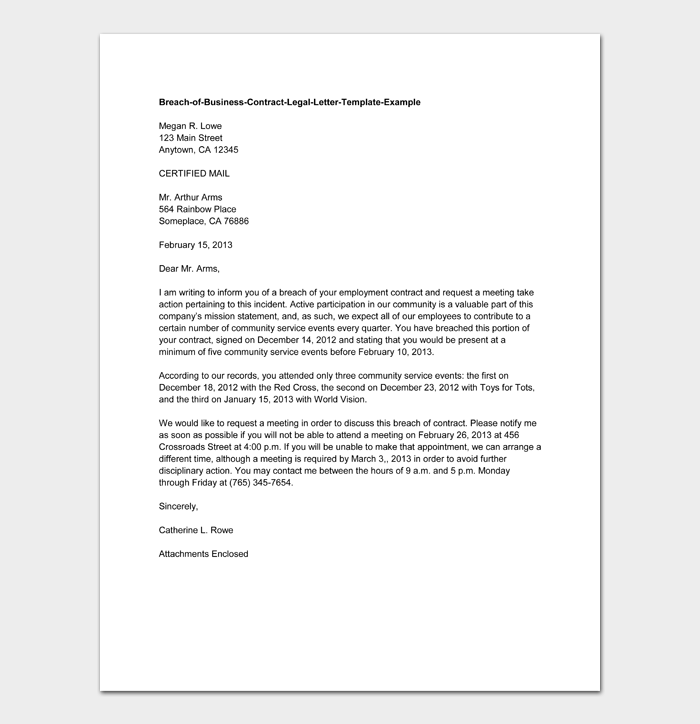 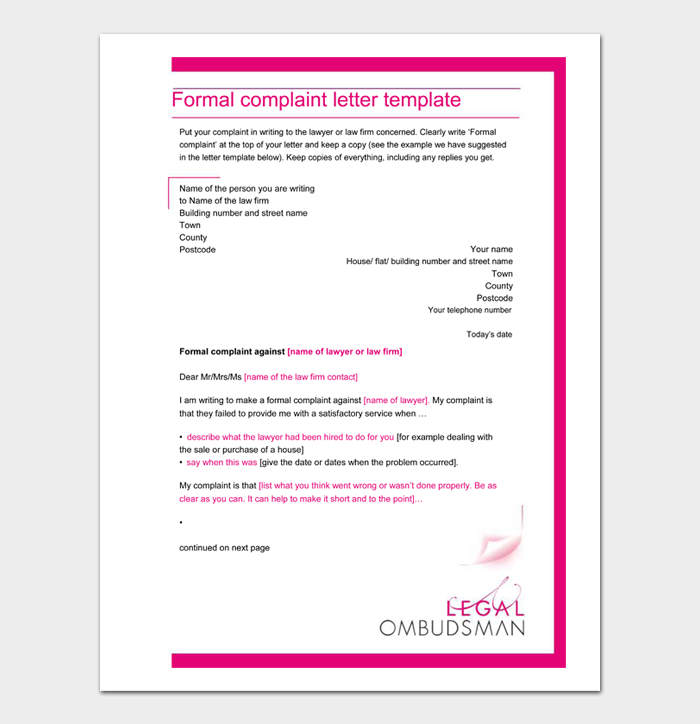 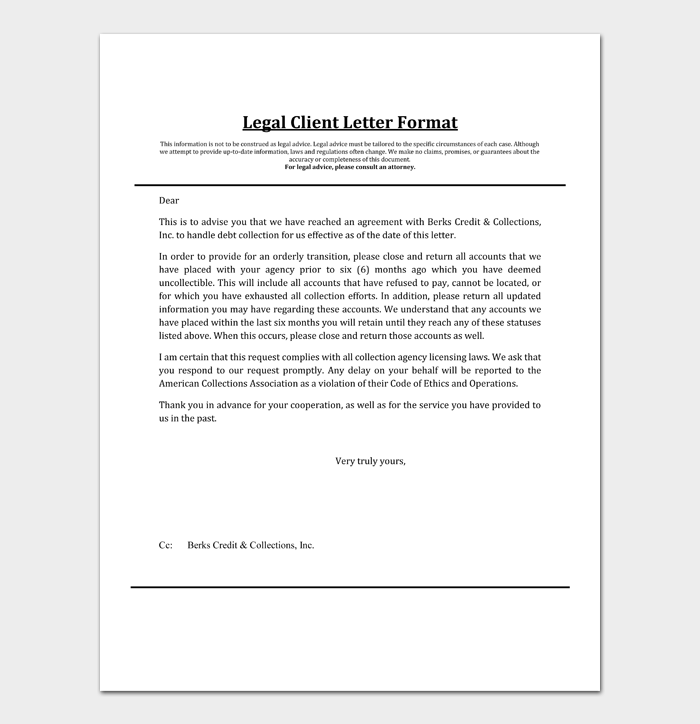 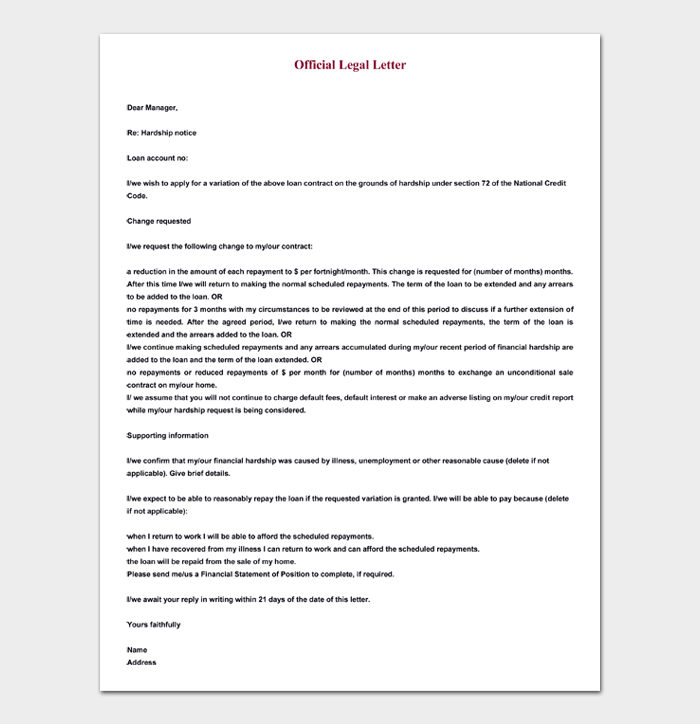 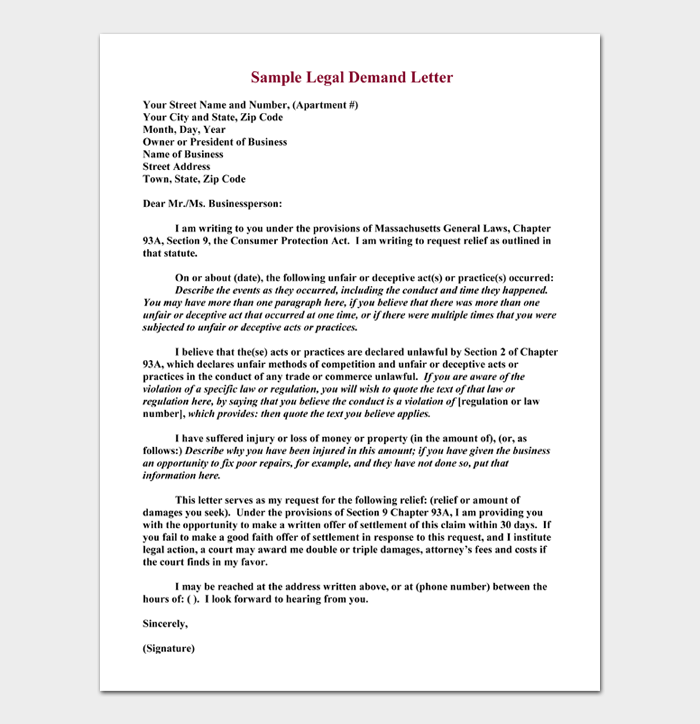 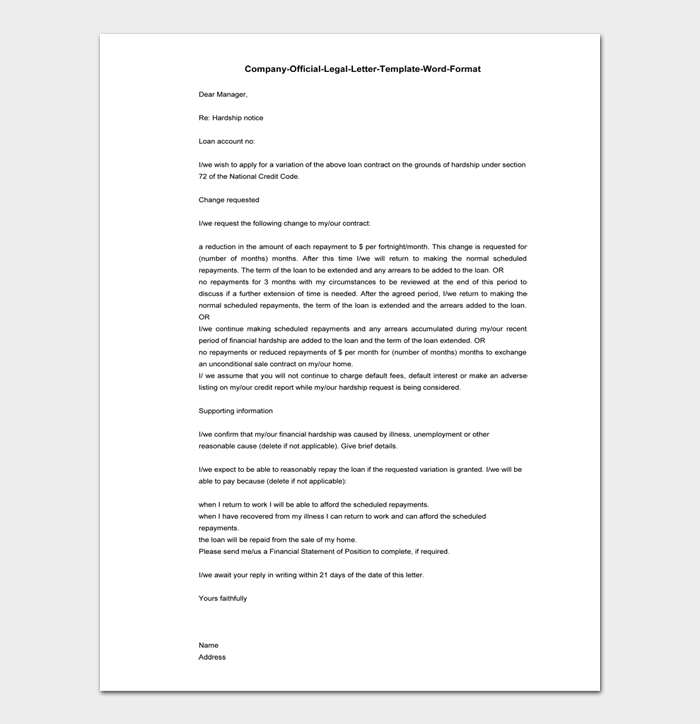 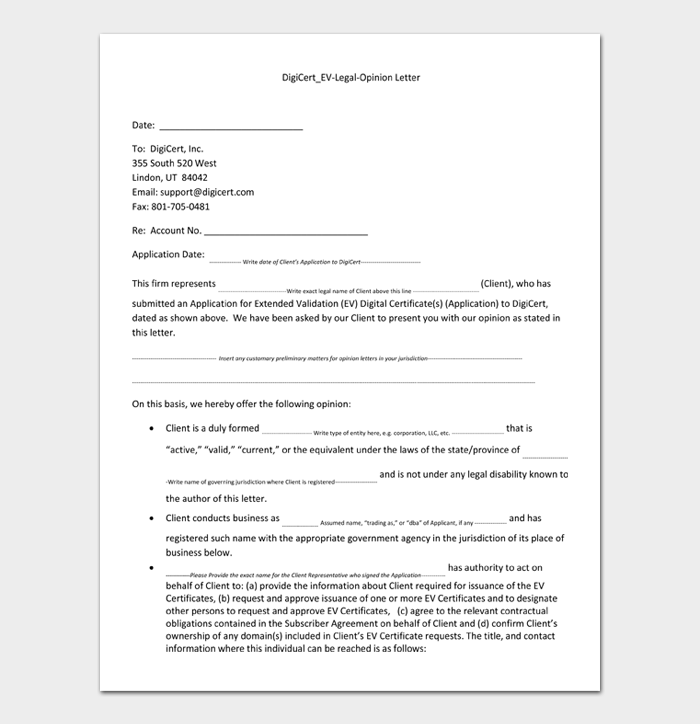 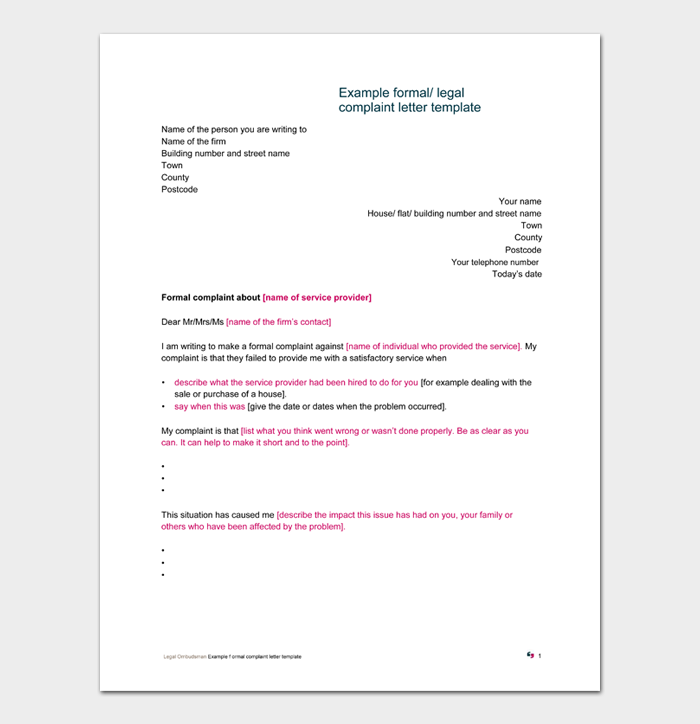 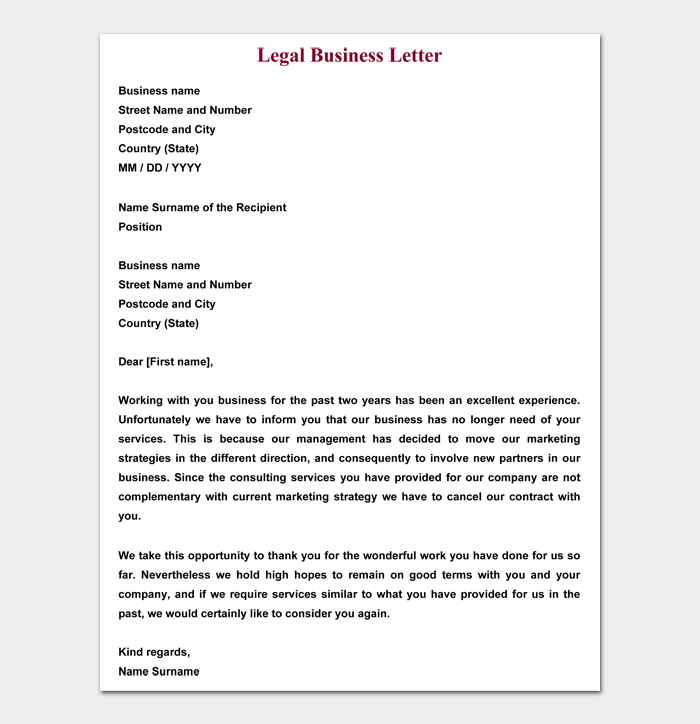 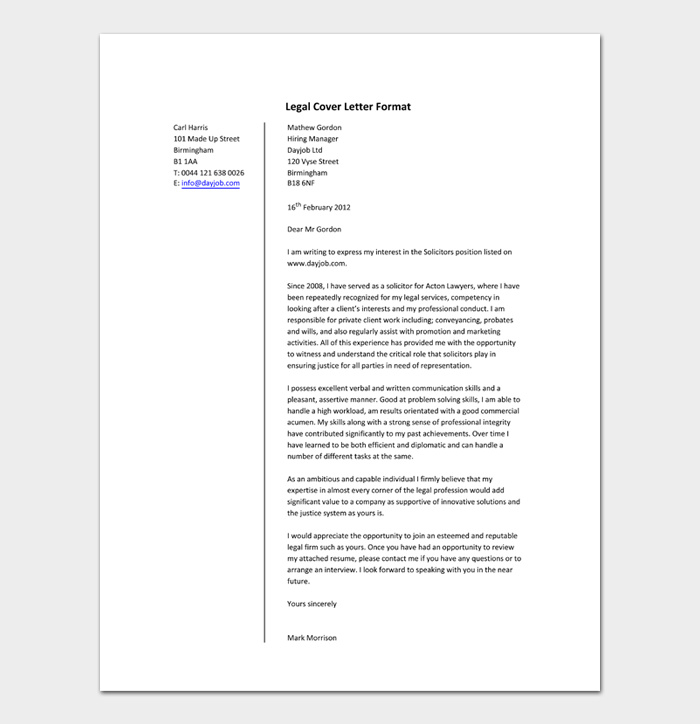 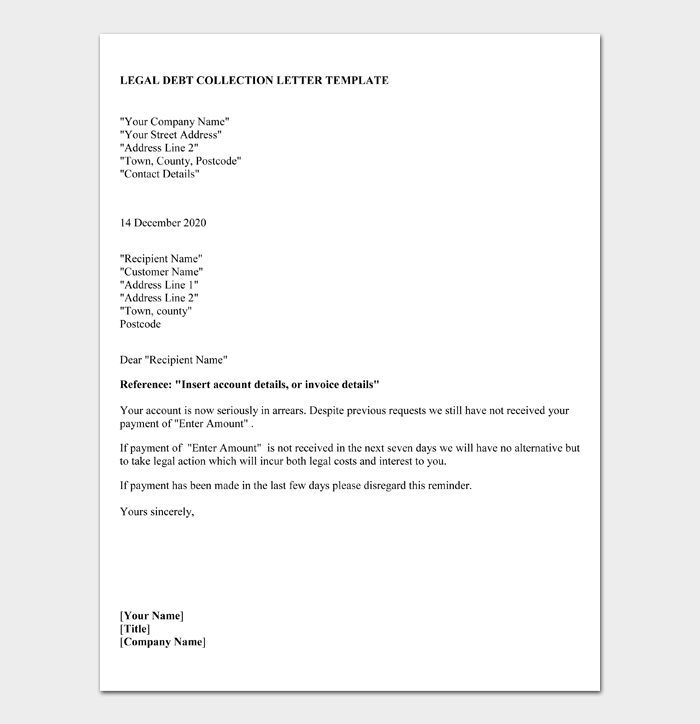 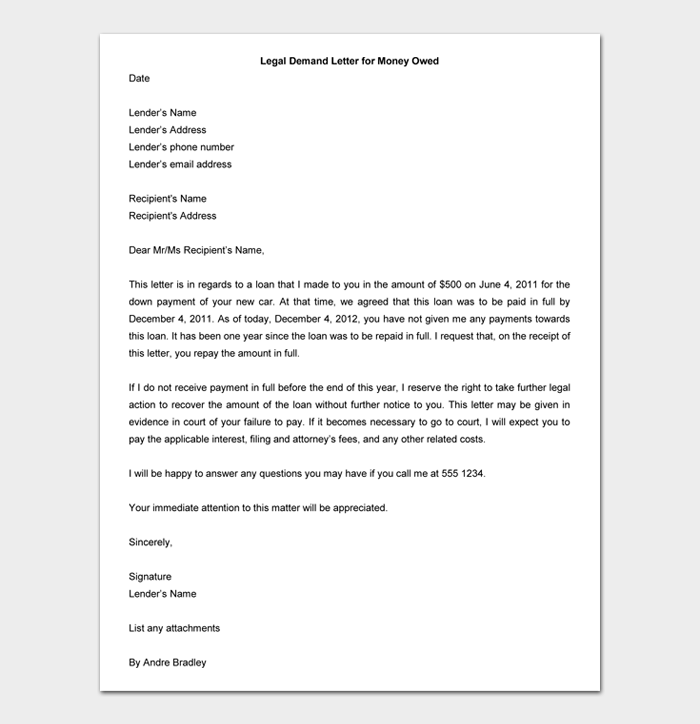 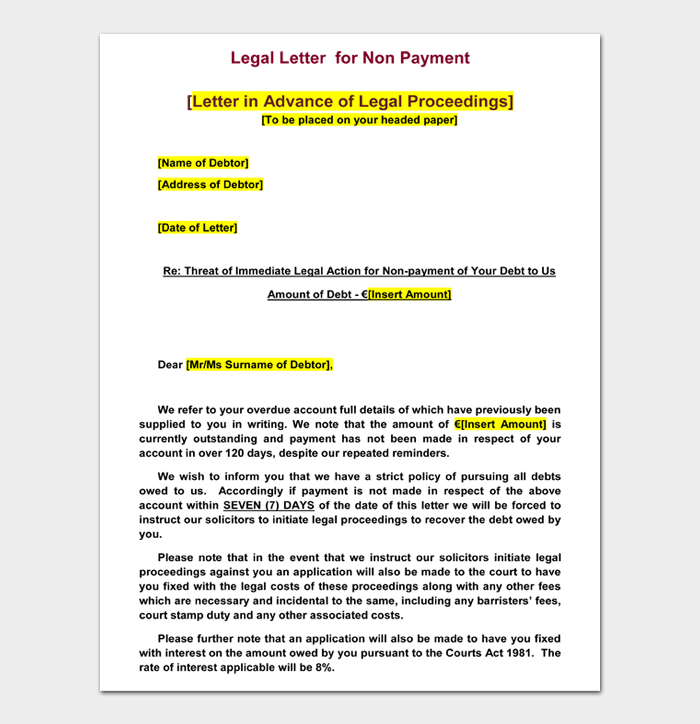 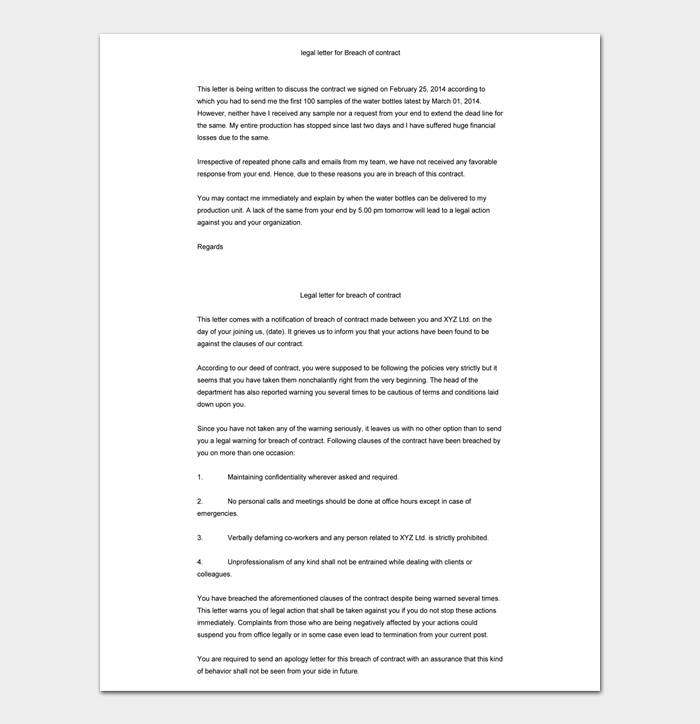 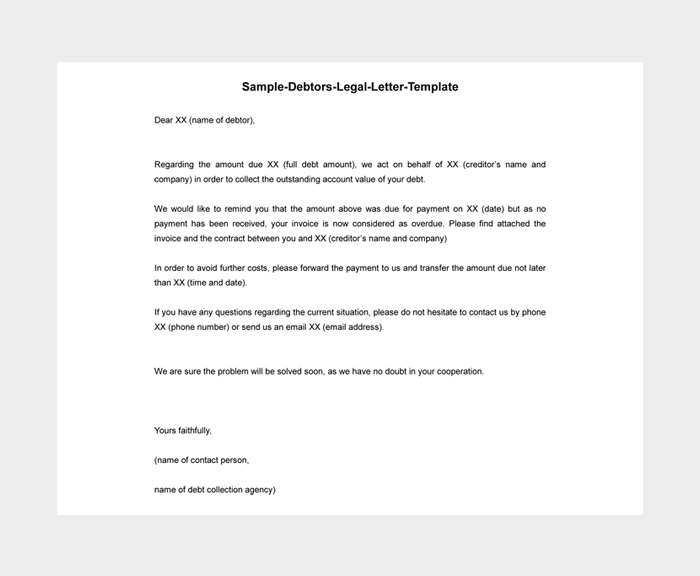 In a nutshell, a legal letter states the actions that must be performed by individuals or groups and the consequences of noncompliance. It is a formal letter that carries an inherent sense of urgency. While legal counsels are better trained to draft these letters, with sufficient information, you can write an effective one. Declare your terms and make sure you use legal letter formats that are clear and concise. 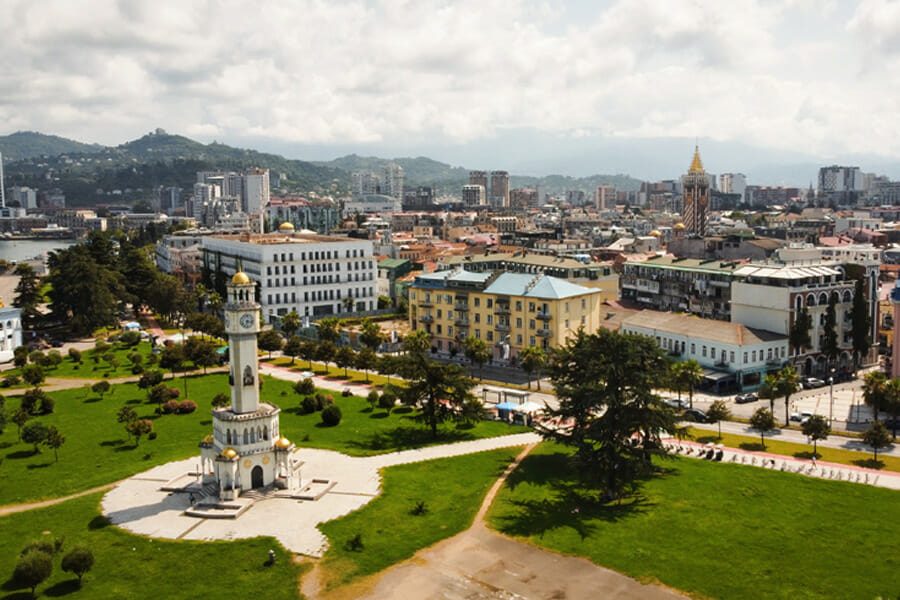 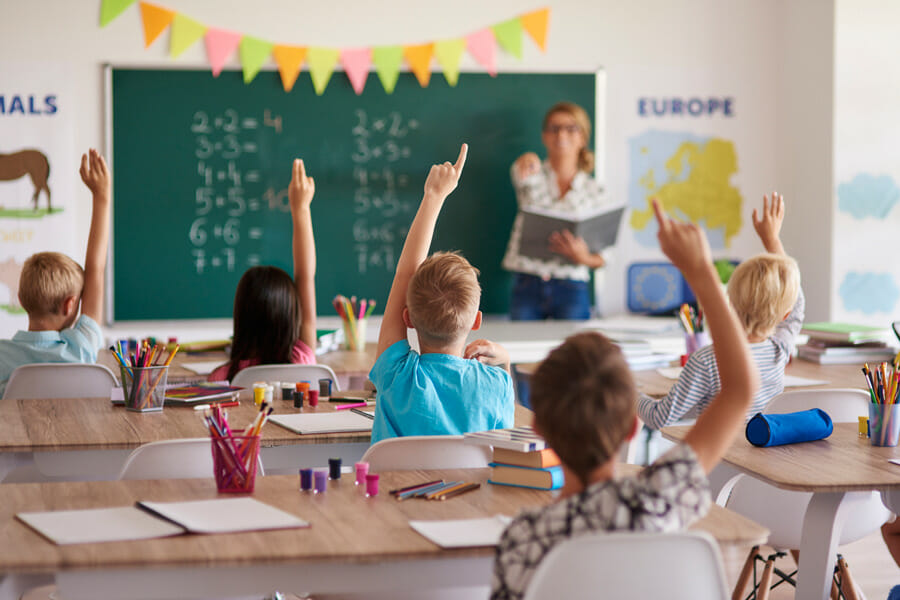 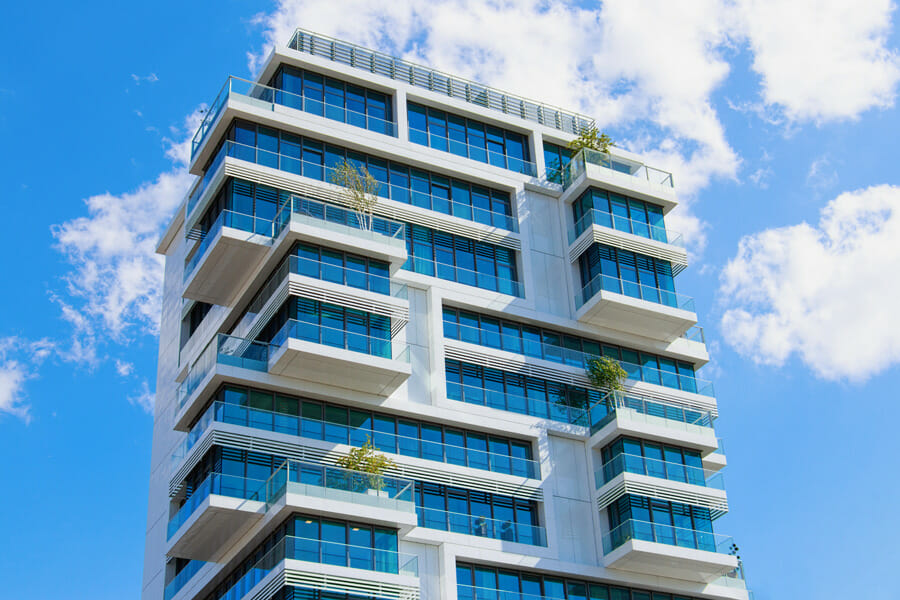 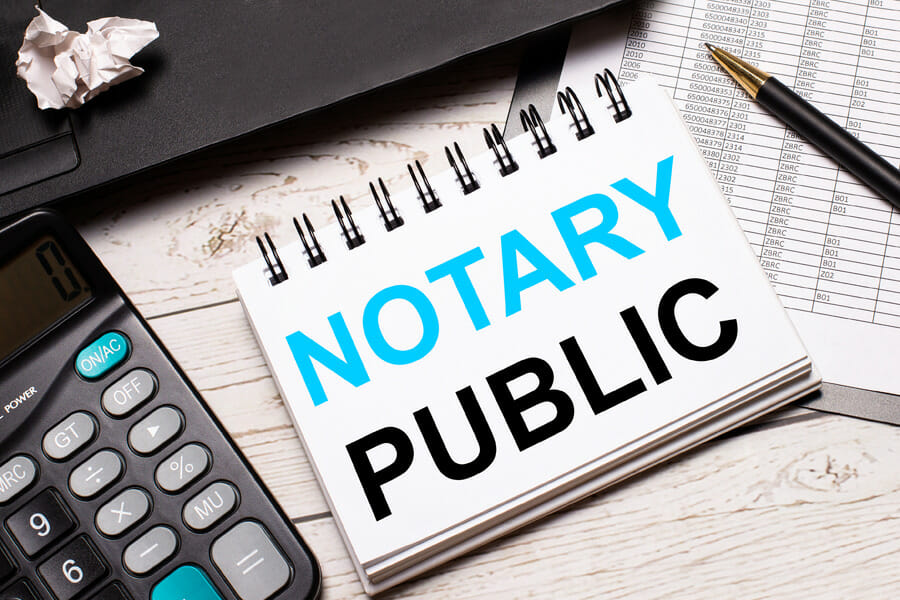 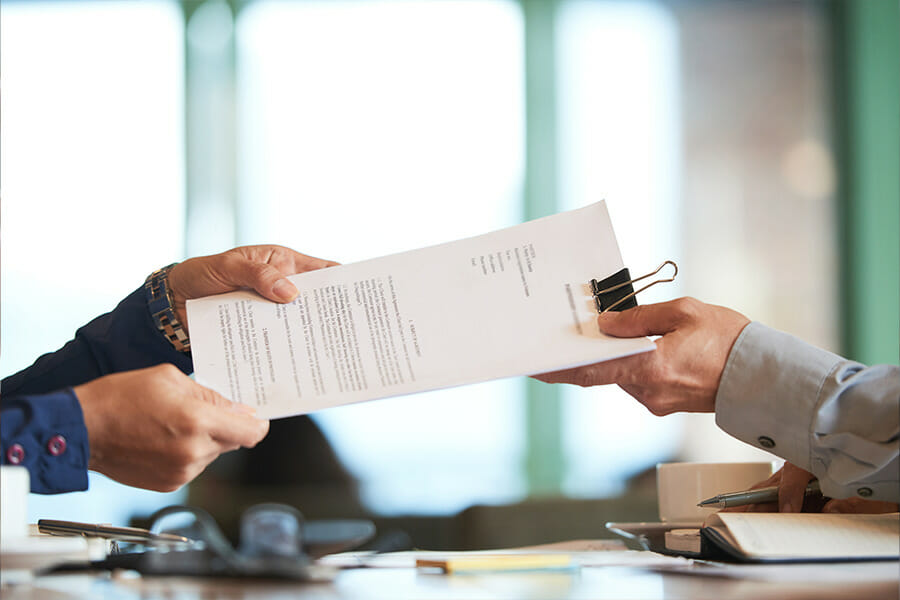 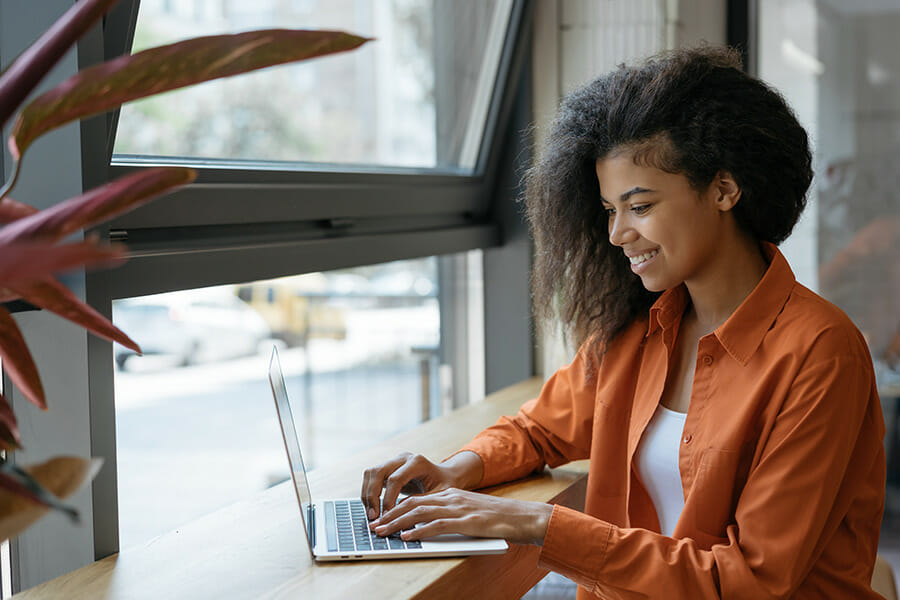 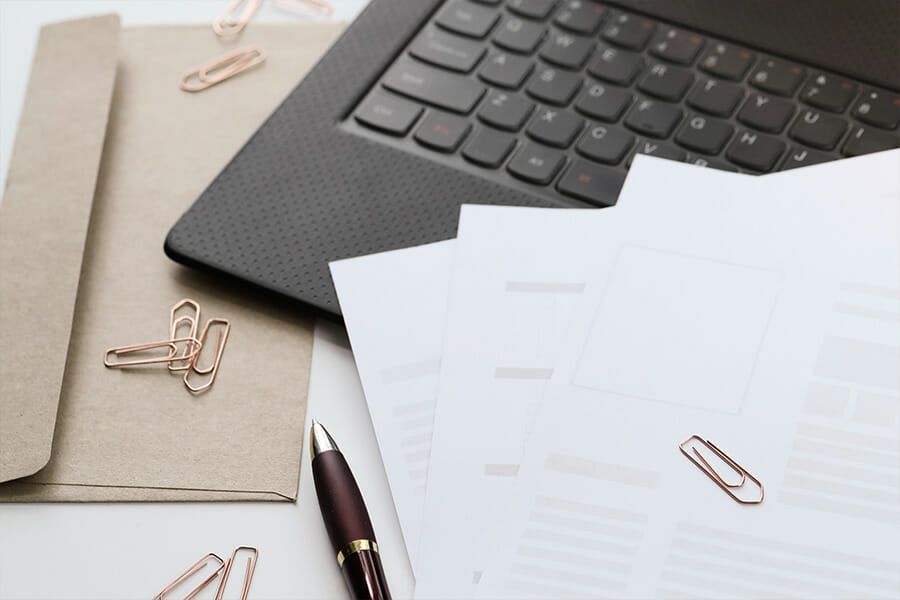 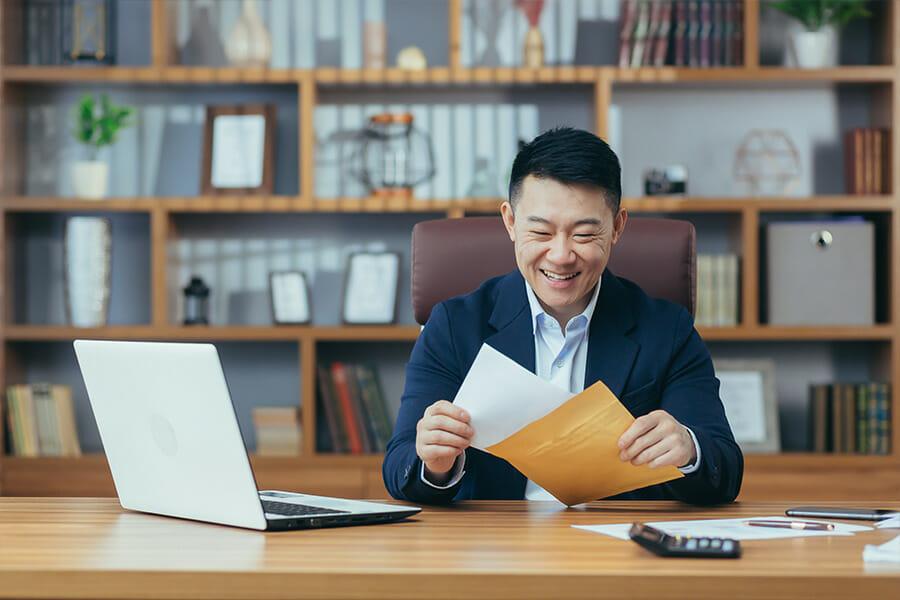