Whether you are an experienced or inexperienced actor, you need to present an acting resume to land a role in the entertainment industry. The acting career can be quite frustrating if you don’t have the right acting resume that will get you roles to start or develop your career.

An acting resume is a specially formatted resume used by actors seeking roles in theater, film, TV, or any other acting role. An acting resume is quite different from other professional resumes as it has an actor’s headshot and details of the actor, all fitting on an 8” x 10” sheet of paper. Other common inclusions in an acting resume are past training, past acting roles, and agent’s contact information.

An acting resume can also include the strong traits, skills, and awards that make the actor stand out.

How to Make an Acting Resume?

You should recognize an acting resume as different from normal resumes. This is why you need to follow specific steps that will guide you to making a professional-looking acting resume.

1.Relate it to a role

The first thing that you need to do is to tailor-make your resume to fit the specific role that you want. For example, if you want a role in the theaters, you should include relevant experience in the theaters.

3.Include your physical characteristics

You should highlight your physical traits such as weight, height, eye color, and clothing size. This might be important to help in placing you in a role.

You should use the reverse chronological order when listing the acting roles that you have done in the past. You should start with the most recent going back.

List all the academic and training qualifications that you have. If you have attended college, you should list the date of graduation.  If there is any professional training that you have undergone that is related to acting, you should include it.

You should list the set of unique skills that you have that can boost your chances of being picked. For example, if you have certain stunt skills, you should include them as you are likely to be favored over a non-skilled actor.

You should list your notable accomplishments in the acting industry.

Your referees should be respected leaders in the acting industry such as well-known directors and producers. However, you should only include them in your acting resume if you have worked with them before and they can attest to your acting skills.

10.Attach your resume to your headshot

After you have finished writing the resume and proofread it, you can attach it to the back of your headshot. Ensure that it meets the 8” x 10” page requirements.

You can use this format to guide your writing of an actor’s resume.

[state and city of residence],

[Summary and objective of the resume]

[Acting experience – start with the recent]

This example illustrates how you can write an acting resume.

Resume summary: passionate creative with a dynamic nature, accommodating complex acting and drama roles. Dedicated to making the best of every acting experience by creating a formidable relationship between the characters and the audience.  Two-time Grammy Award winner. 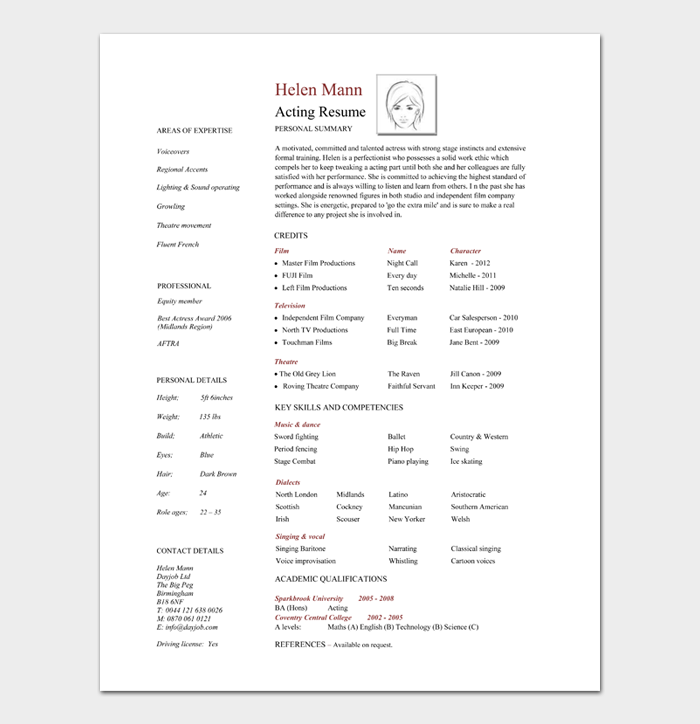 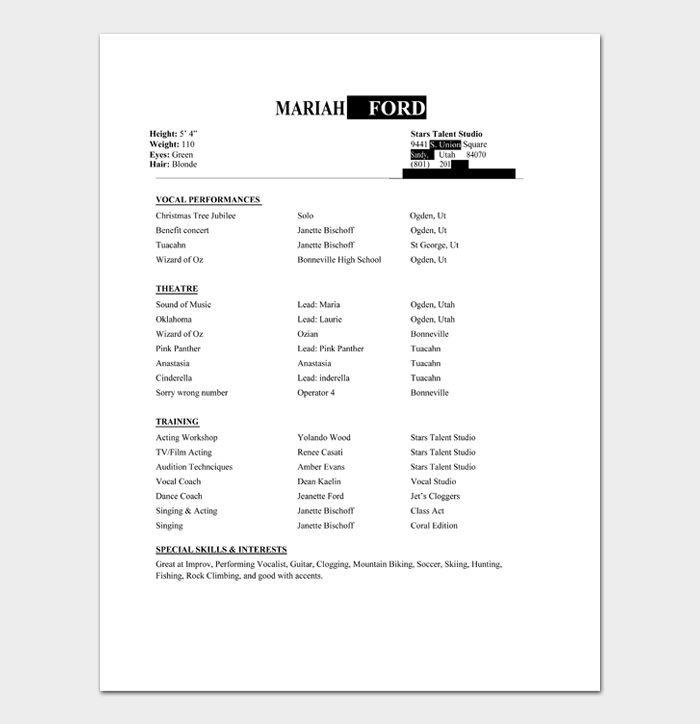 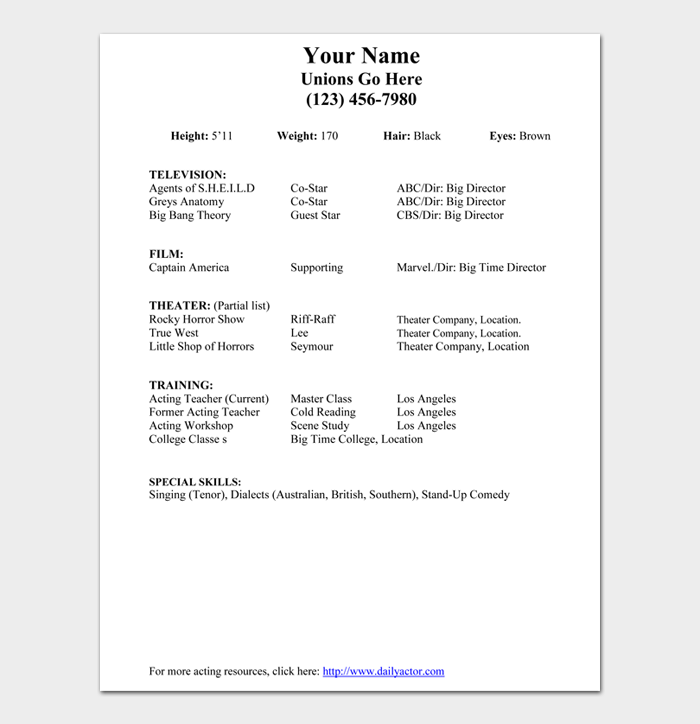 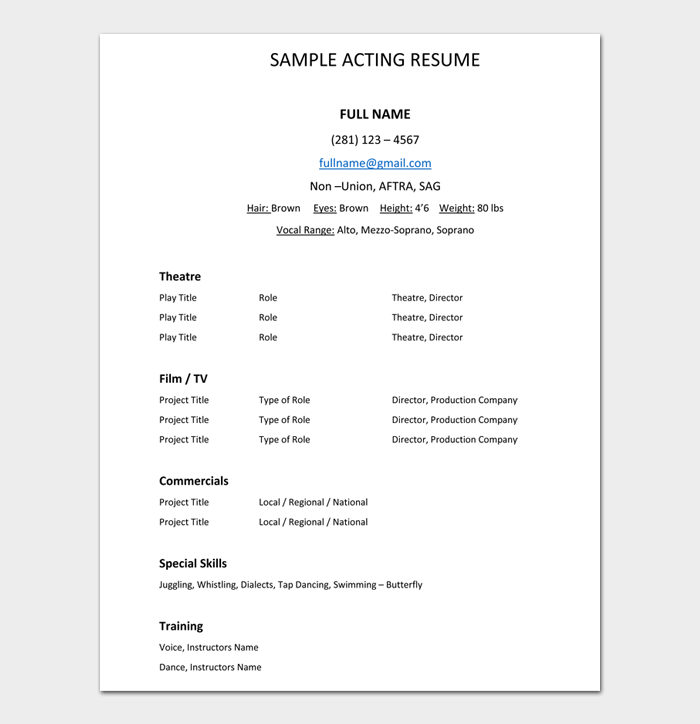 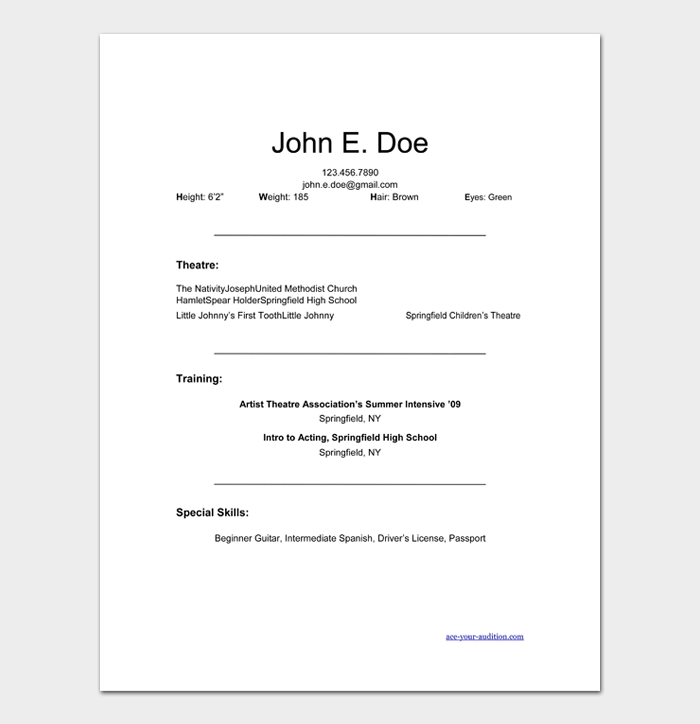 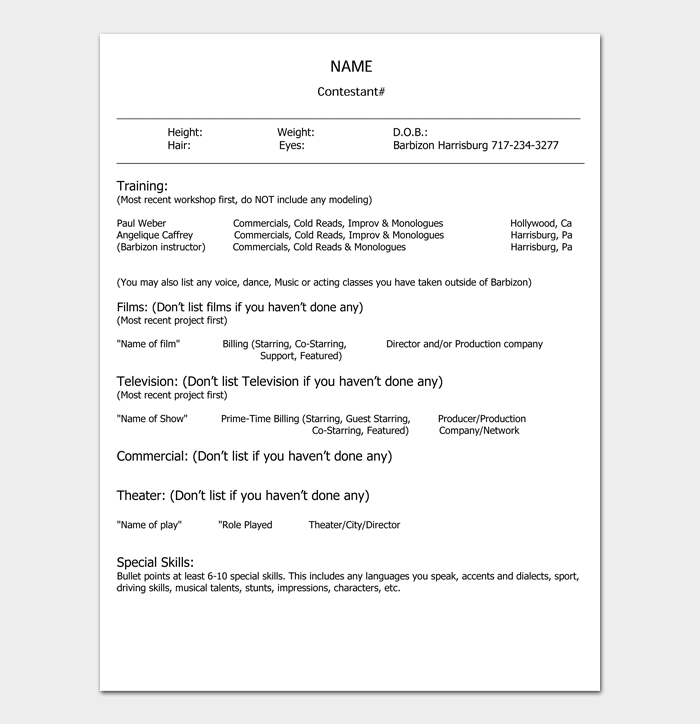 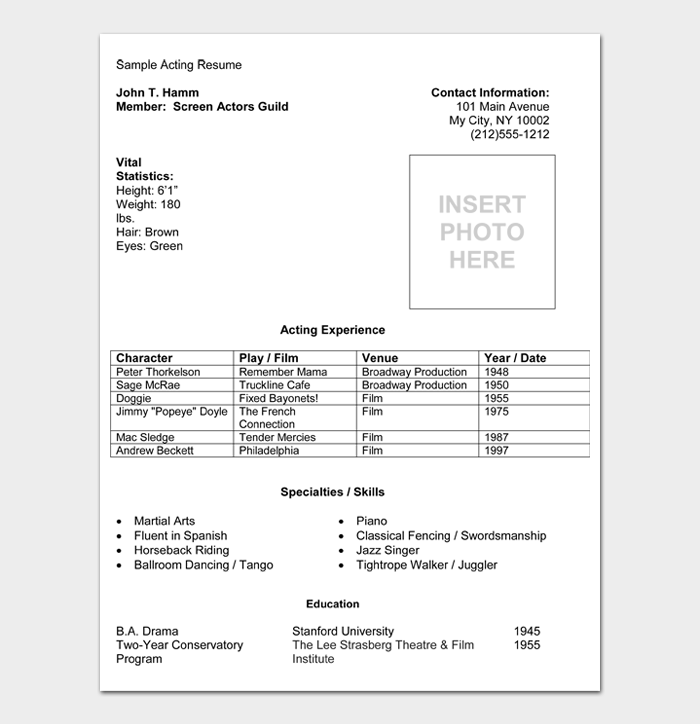 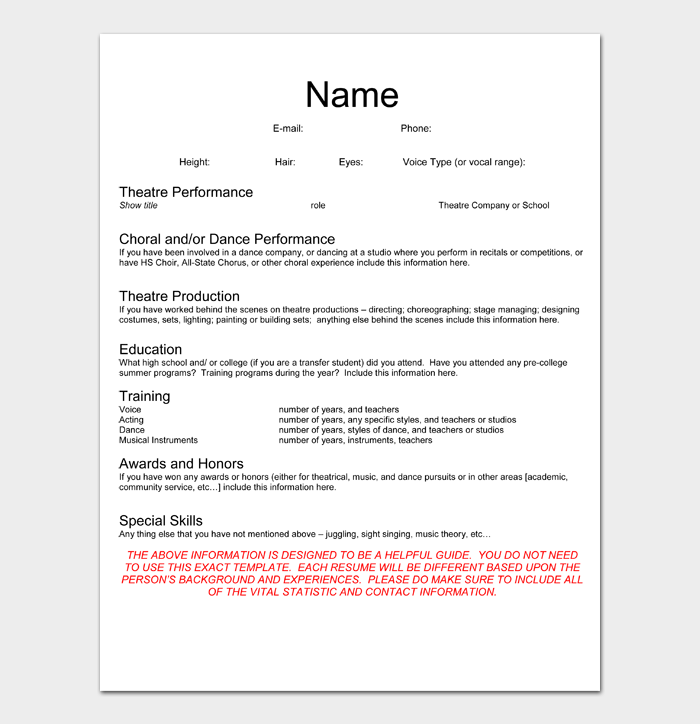 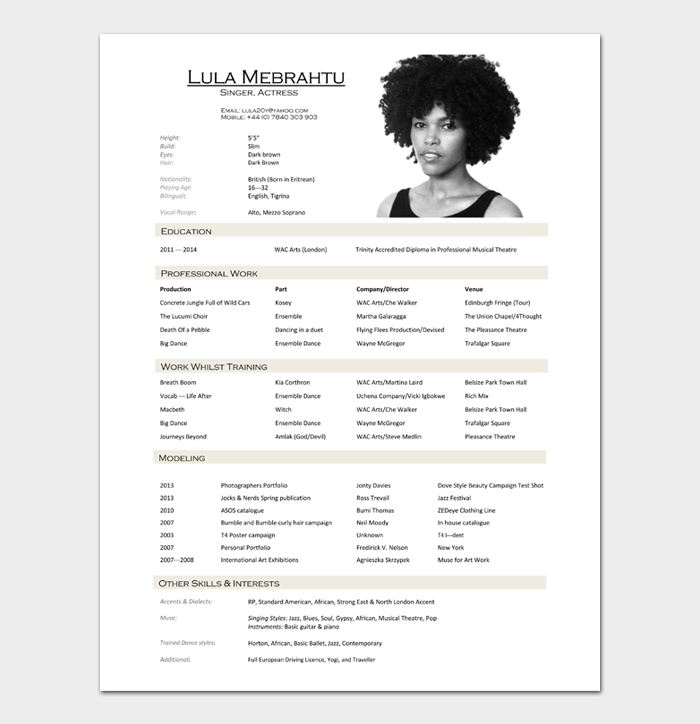 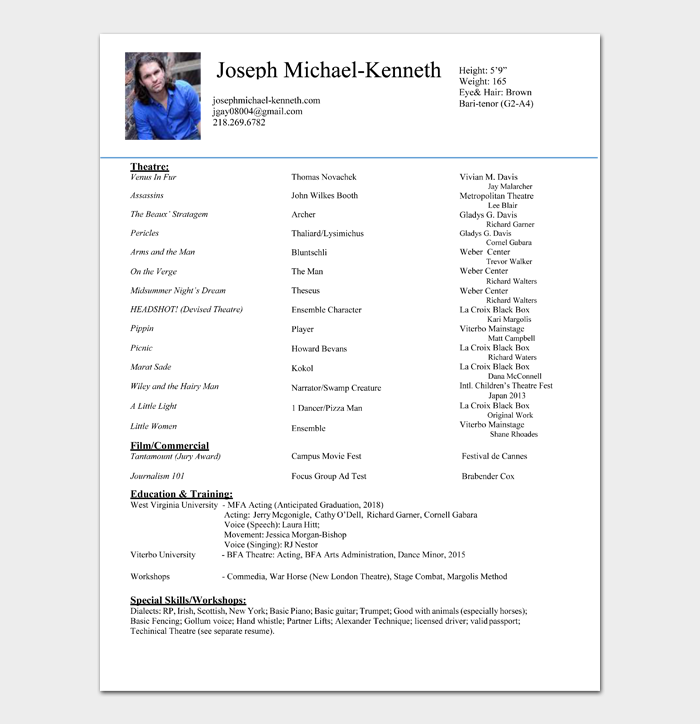 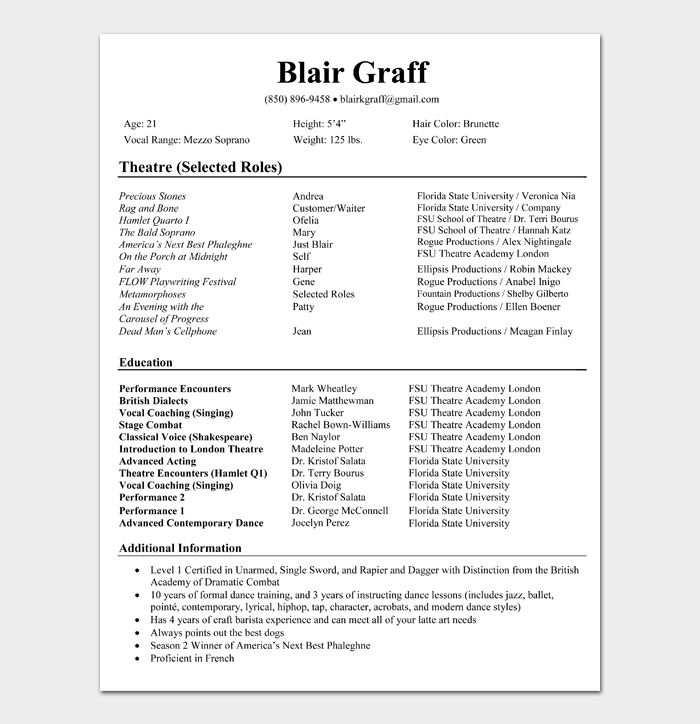 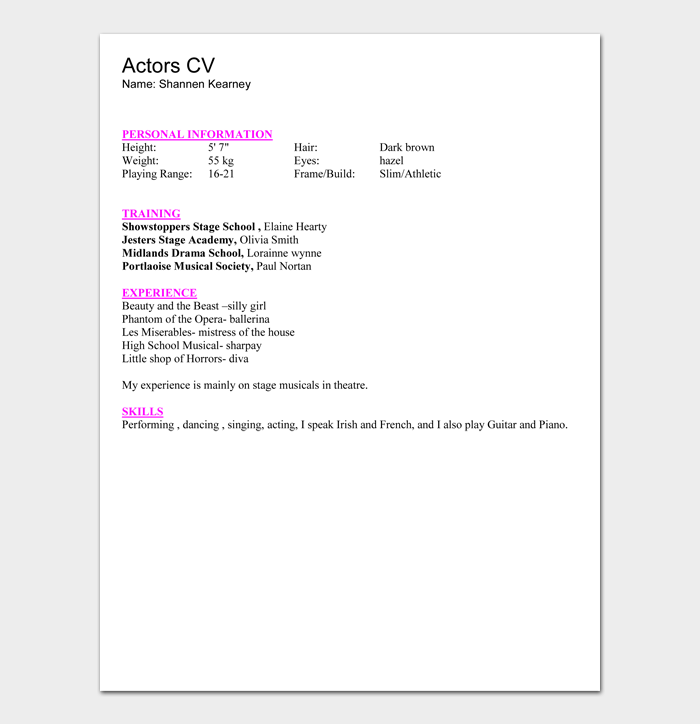 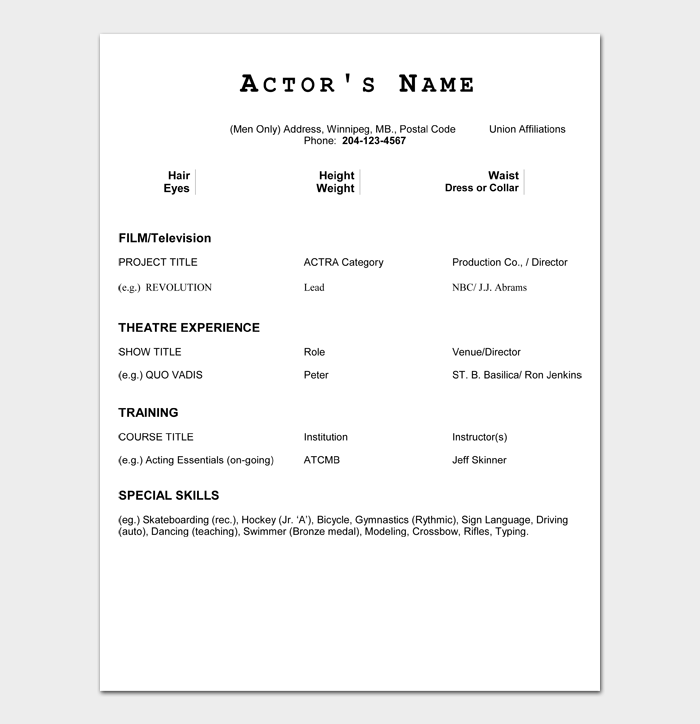 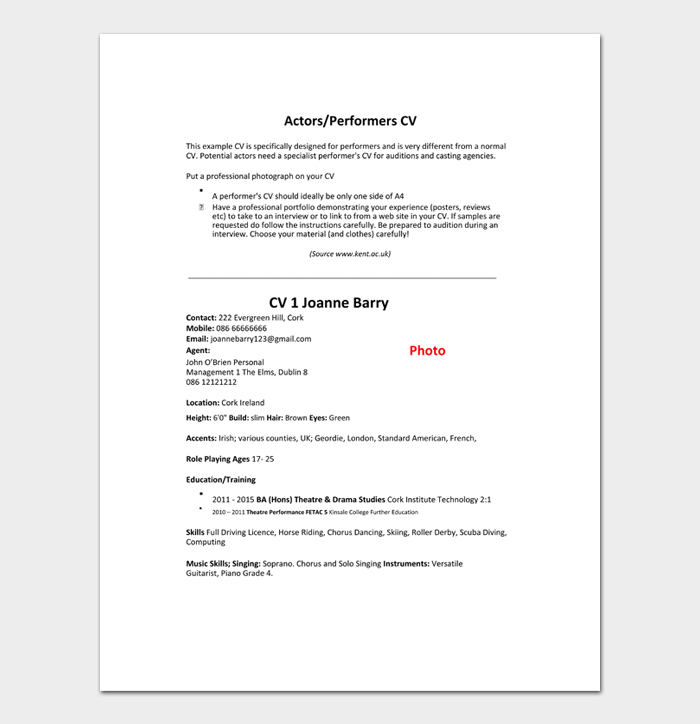 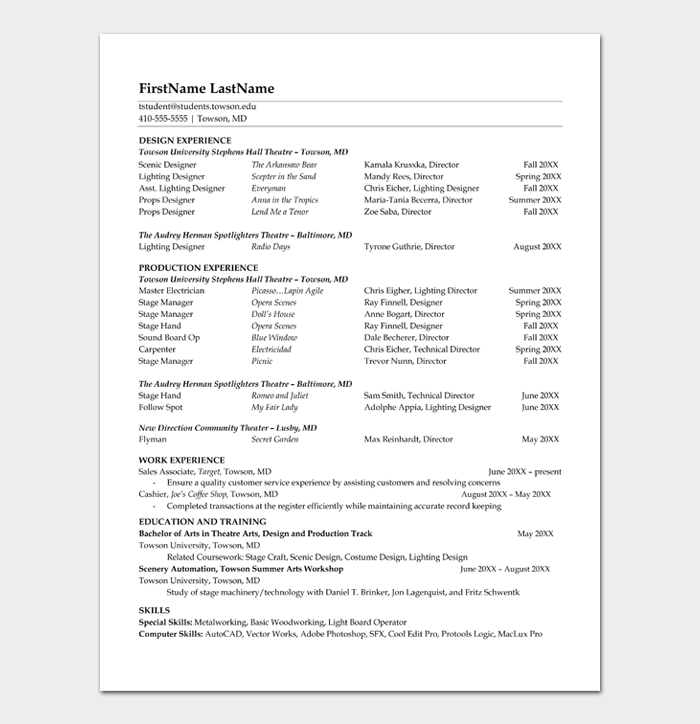 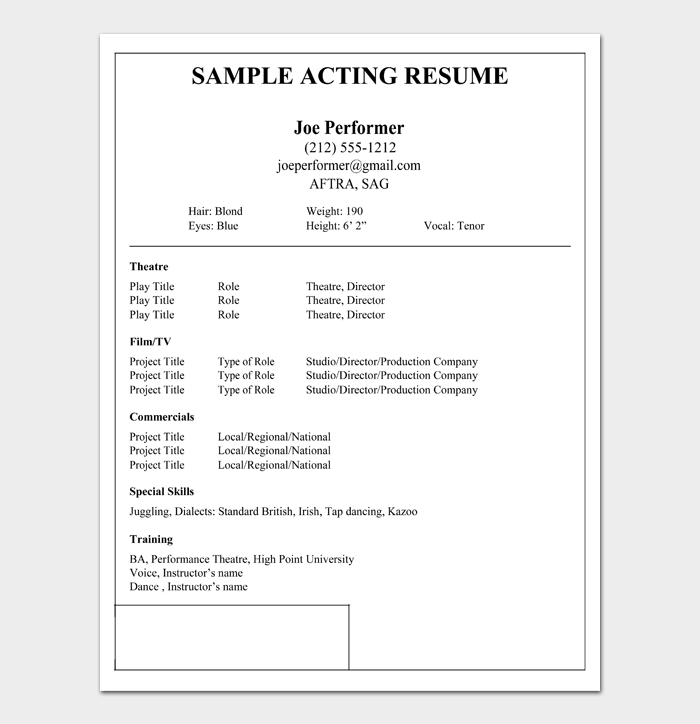 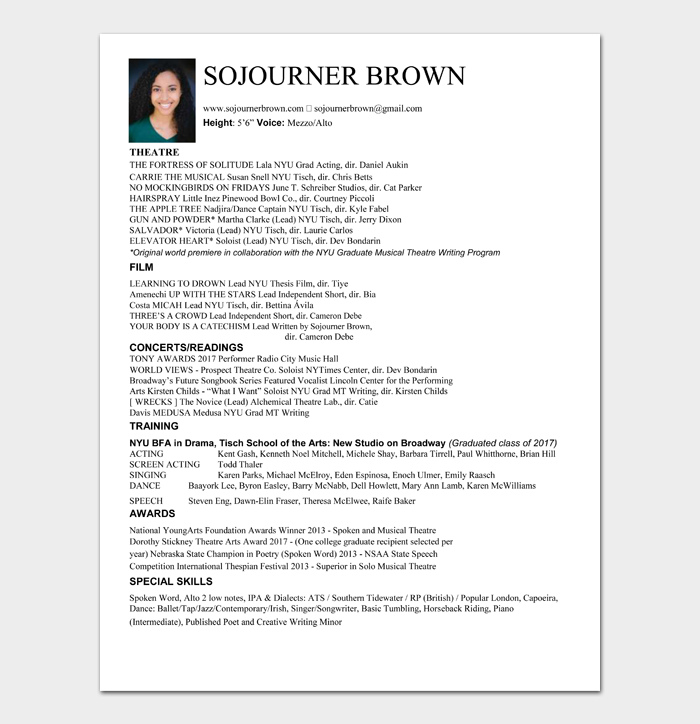 Examples of Skills for an Acting Resume

Here are some examples of skills that you can include in your acting resume to make it stand out:

If you do not have experience in acting, you should highlight your education and training as important parts of your acting resume.

Put much emphasis on what you have learned in any acting-related training. If you have any set of skills that can make you stand out, ensure that you include them. For example, if you have a second language or an award for excellence, you should include them as well.

Mistakes to Avoid in Your Acting Resume

There are six mistakes that you should avoid when writing your acting resume.

Whether you have experience or not, you should prioritize making a good acting resume. If you follow these simple guidelines, you will have a good resume that will land you a big acting role. 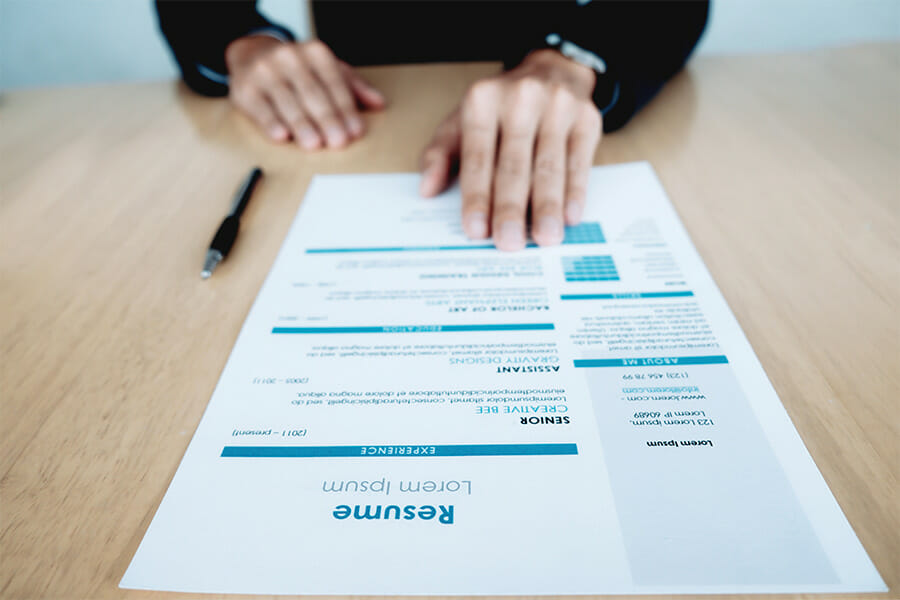 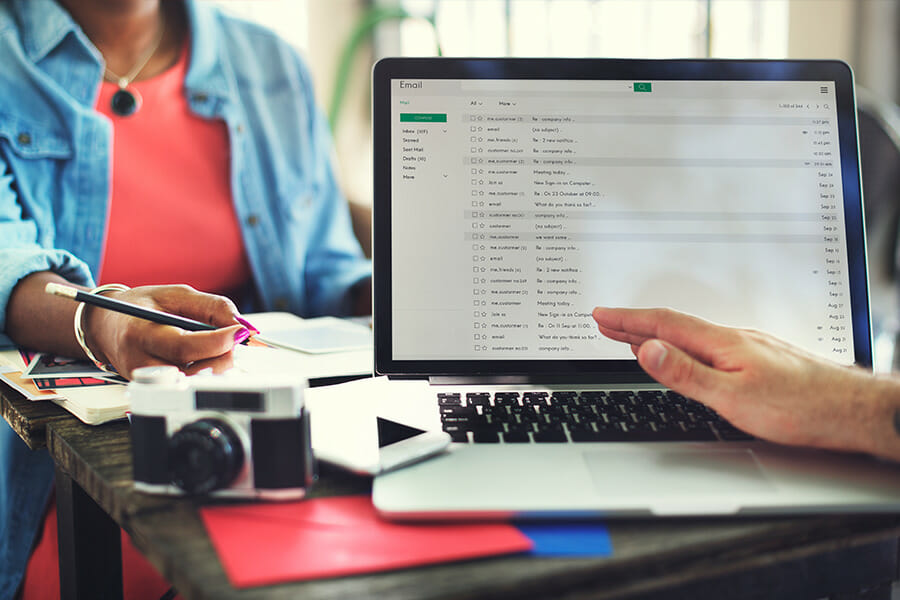 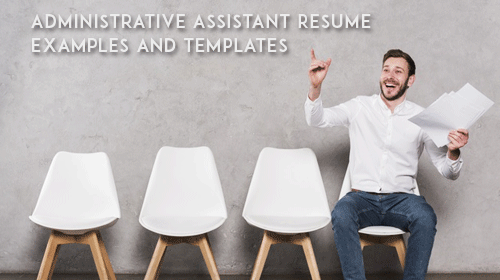 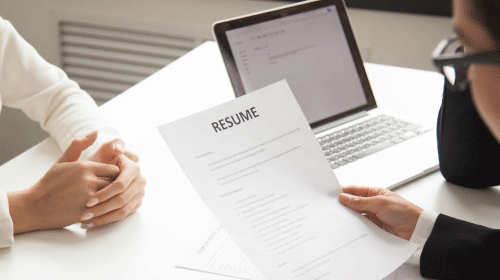 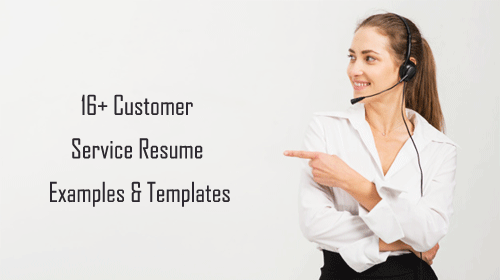 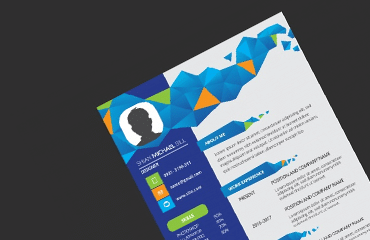 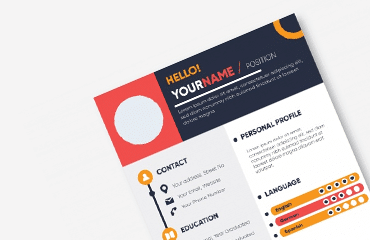 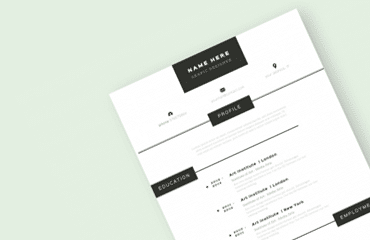